COVID-19 Vaccination: When Will the U.S. Reach Herd Immunity? 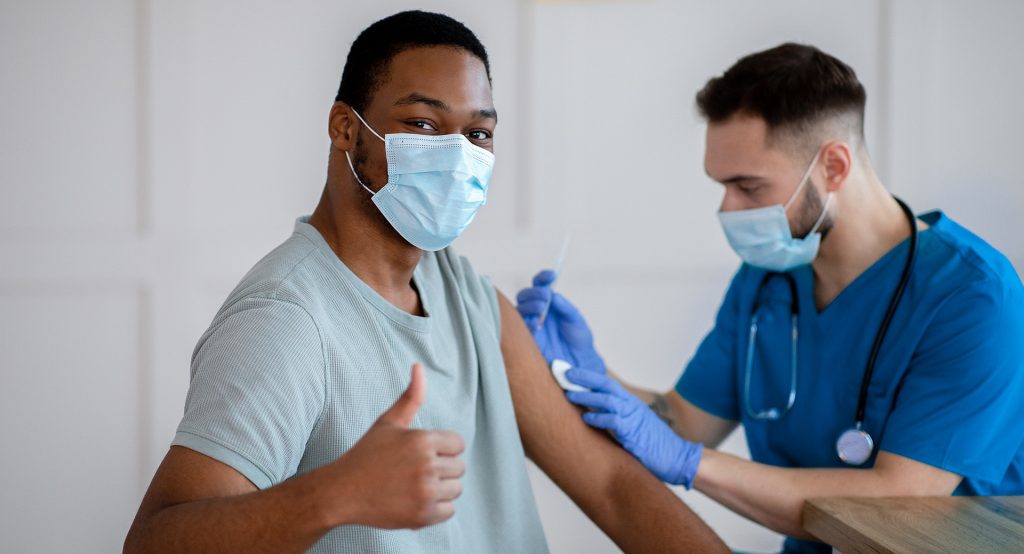 Three COVID-19 vaccines produced by Pfizer, Moderna and Johnson & Johnson have all received emergency use authorization in the United States and a mass vaccination program is now underway. The vaccines are all very safe and effective, and as of the beginning of April 2021 more than 108 million people have received at least one dose, which is about 33% of the total U.S. population (CDC 2021).

Vaccine Technology and Efficacy
The Pfizer and Moderna vaccines are mRNA vaccines administered in two doses three to four weeks apart and require very cold storage temperatures (minus 70 degrees Celsius for Pfizer and minus 20 Celsius for Moderna). The Johnson & Johnson vaccine is adenovirus–mediated, which uses a different technology, requires only one dose, and can be stored in a normal refrigerator. Pfizer reported an efficacy against symptomatic COVID-19 of 94.5% and Moderna 95%.  Johnson & Johnson reported an efficacy of 72% in the U.S. and slightly lower efficacies in other countries such as South Africa where a more contagious variant is dominant. All three vaccines prevented 100% of hospitalizations and deaths in all ages in the large phase 3 trials that were administered in several countries in diverse populations.

For now, the Pfizer, Moderna and Johnson & Johnson vaccines are effective in preventing all strains of the virus, including new UK and South African strains that have been reported to be more contagious than other strains. When a pathogen is more contagious, the herd immunity threshold is higher. For instance, measles is more contagious than COVID-19 and the herd immunity threshold is 93% to 95%. Herd immunity is achieved when one infected person spreads the virus to less than one secondary case on average (called reproduction number or R0) because the proportion of the immune population is high (Fontanet and Cauchemez 2020).

Reaching the Herd Immunity Threshold
There have been more than 30 million reported COVID-19 cases in the United States but many more that were undetected because 40-50% of people infected are asymptomatic and they are unaware that they contracted the virus. Natural infection has been shown to produce a robust immune response more than six months after infection, thus protecting people who were previously infected from reinfection (Dan et al. 2021). While the number of unreported cases is difficult to determine, estimates can be made based on seroprevalence studies that measure antibodies in the blood of people who were not vaccinated (Stout and Rigatti 2021). The American Red Cross reported that in early March 2021, more than 20% of blood donations from unvaccinated people had antibodies for SARS CoV-2, the virus that causes COVID-19. Michael Osterholm, director of the Center for Infectious Disease Research and Policy at the University of Minnesota, has estimated that in the U.S. in early March 2021, approximately 50% of the population has either been vaccinated or has been previously infected.

While the availability and distribution of the vaccines presents difficult challenges, vaccine hesitancy and refusal could be a major barrier to reaching the herd immunity threshold. A recent poll by Monmouth University reported that approximately 25% of people polled said that they are unwilling to be vaccinated. However, a significant proportion of these people will have immunity because they were previously infected.

Implications of Natural Selection and Viral Mutations
One of the most vexing challenges of COVID-19 is that the vaccines might not work as well against future strains of the vaccine. Pathogens are continually evolving and RNA viruses such as SARS CoV-2 have high mutation rates. Virus genetic code is naturally variable and viral strains that are better adapted to their environment are more likely to survive and replicate, i.e., survival of the fittest. A mutation is a small change in the genes of an organism (e.g., virus) during the replication process. The vast majority of mutations do not alter biological properties such as virulence (i.e., severity of illness) or transmissibility (i.e., how contagious it is) but in very rare cases they do. One way viruses change is called antigenic drift, which involves mutations that happen continually over time as the virus replicates in humans. The original strain of SARS-CoV-2 that emerged in Wuhan, China, has largely been replaced globally by strains containing a mutation called D614G (Hou et al. 2020). Experiments have shown that the new dominant global variant with the D614G mutation is more transmissible in humans but does not cause more severe disease compared to the original emergent Chinese strain. Globally, there are many different strains identified by the country in which they emerged including U.K., South African and Brazilian strains. The three existing vaccines have been shown to be very effective at preventing hospitalization and death in the original emergent strain, the dominant global strains with the D614G mutation, and the U.K. and South African strains. There will no doubt be future strains and the existing vaccines might not be as effective against them, necessitating the development and administration of boosters targeting new strains.

Waning Patterns, Vaccinating Children, and Potential COVID-19 Endemicity
We do not know how long immunity against the virus will last with vaccination. The effect might wane over time, as is the case with other vaccines such as tetanus. Also, the Pfizer vaccine is only authorized to be given to people 16 and older and the Moderna and Johnson & Johnson vaccines to those 18 and older, and 22% of the U.S. population is under 18. Trials are underway now testing the safety and efficacy of the Pfizer and Moderna vaccines in children 12 years and older and Johnson & Johnson has also announced that it will soon begin trials in that age group.

Trials will also soon begin for the Moderna and Pfizer vaccines in children from 6 months to 11 years old and Johnson & Johnson has announced that they will do the same. As previously mentioned, the vaccines could be less effective against new variants as they become dominant.  In that case we would likely need periodic boosters as we have with annual influenza vaccines. The future of the COVID-19 pandemic might be that it becomes an endemic disease that we must constantly battle similar to influenza. However, with increased immunity in the population we are probably heading to a new phase of the pandemic with less risk of community spread.

Vaccine Exemptions
Educational institutions have vaccine mandates, but they include medical exemptions for those who would be harmed by the vaccine such as individuals with allergies to the vaccines or those who are immunocompromised. There are also exemptions based on religious or philosophical beliefs. The goal of vaccination programs is to vaccinate as many people as possible and exemptions reduce the total number who are vaccinated. Exemptions usually do not significantly reduce the percentage of people in a community or institution because very few people ask for them. There are notable exceptions, such as a measles outbreaks associated with personal belief exemptions at Disneyland in California in 2015, and another measles outbreak associated with religious exemptions in Brooklyn, New York, in 2019. In both of these cases there was an extraordinarily high number of exemptions and measles is highly contagious, facilitating efficient community transmission. Having a system in place for medical and religious exemptions at institutions such as universities means that there is a record of who is and who is not vaccinated, thus, if there is an outbreak, people who are not vaccinated can be isolated because they are at higher risk of being infected.