The Great Barrington Declaration – Is Herd Immunity really the answer to the pandemic? 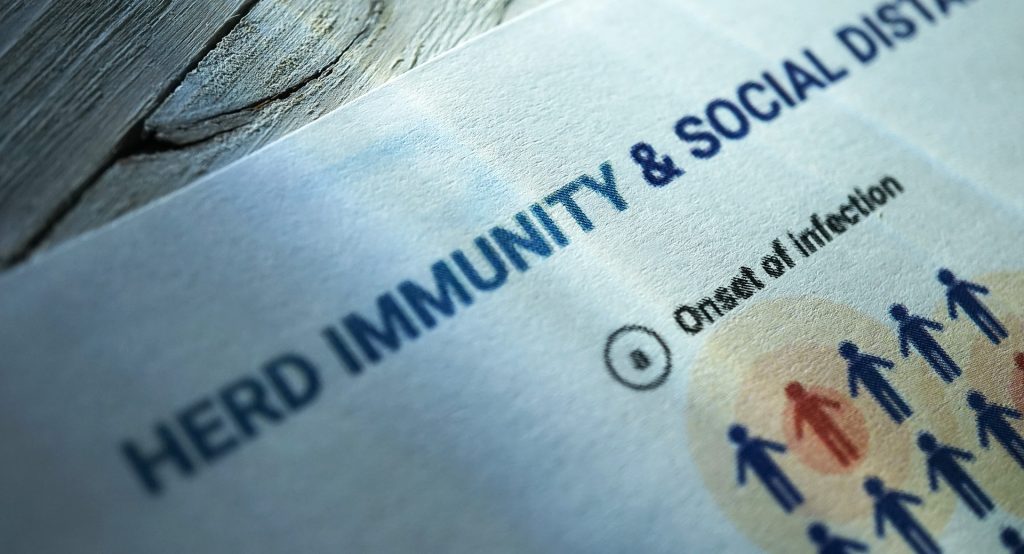 Throughout much of the world, COVID-19 public health measures are being used to keep people separated to control community spread until vaccines and therapeutics become available.

Should we end these practices now without a vaccine in hand, and push toward herd immunity?

Drafted at the American Institute for Economic Research in Great Barrington, Massachusetts in early October, the Declaration calls for Focused Protection from COVID-19—in essence, simply protecting old and sick people from getting infected, while not worrying about younger healthier people getting it because their chance of severe disease and death is low.

The Declaration includes some viable statements, and some that are questionable. For example, it states that COVID-19 is less harmful than influenza—this is likely false. It also states the more people who have COVID-19 and recover, the less likely the rest of the population will catch the disease. This is true based on mathematical epidemiological principles.

Authors of the document advocate for resuming activities for all but the vulnerable including working on-site instead of remotely from home, attending schools, dining at restaurants, attending sporting and artistic events, etc. In essence, they are pushing for people with minimal risk to get infected so we can move toward herd immunity via natural infection, while at the same time protecting the vulnerable by isolating them from the rest of society.

Some arguments against the Declaration are that we can’t identify all vulnerable people, much less fully isolate them. There are also many vulnerable people in the world—especially in the U.S. and Europe—of advanced age, along with many suffering from obesity and comorbidities like diabetes who may be negatively impacted by isolation. Since immunity doesn’t last forever, we likely won’t reach herd immunity without a vaccine. We are nowhere near herd immunity at present, so increasing the amount of community spread without a vaccine will lead to more severe illness and death.

The Declaration does have some valid points, including that the COVID-19 global pandemic has exacerbated disparities and led to other health problems like lower vaccination rates, fewer cancer screenings, mental health problems, and big family economic costs. As for Focused Protection, in some ways we are already engaging in this—I’m much more concerned about my elderly mother and in–laws getting COVID-19 than my children or me.  That said, I’m definitely not going to tell my kids to go out and find it. If they contract COVID-19, develop a mild case, and recover then that would be the best case scenario. I’m not going to play with fire, however, just in case they are the unfortunate ones who didn’t know about an undiagnosed comorbidity.

The Great Barrington Declaration is finding opposition by public health and medical experts like The World Health Organization who have called the proposed strategy dangerous, radical, and lacking a sound scientific basis.

A more mainstream viewpoint is articulated in the John Snow Memo which basically focuses on limiting community spread and protecting the vulnerable until we have effective therapeutics and efficacious vaccines, as opposed to attempting to reach herd immunity.

I personally don’t sign any petitions ever, but I think the John Snow group is the approach which will result in far fewer deaths. Hopefully, the arrival of vaccines and good therapeutics sooner rather than later will help all of us resume our normal lives.

In the end, both the Declaration and the John Snow Memo both suggest we protect the vulnerable. Above all else, this is something we should embrace.